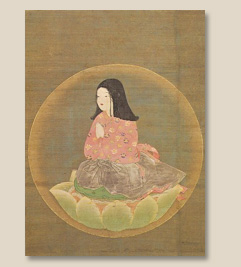 Kukai (Kobe Daishi as a boy)
Image courtesy of ARAS
“Play is always exciting. It is exciting not because of the background of instinct, but because of the precariousness that is inherent in it, since it always deals with the knife-edge between the subjective and that which is objectively perceived.” D.W. Winnicott

I am a psychotherapist and Jungian analyst certified to work with children and adolescents. For many years I served as an Associate Clinical Professor in the Child and Adolescent Training Program, School of Psychiatry, at the University of California at San Francisco. In my practice I see children ages 3 and up who have many different kinds of problems including overly aggressive behavior, excessively withdrawn behavior, anxiety, sleep disturbance, night terrors, obsessions, compulsions, problems with learning, attention deficit problems, excessively impulsive behavior, problems in peer relations, enuresis (bedwetting), encopresis (soiling), problems with self-esteem, and problems with self-concept. I have also worked with children who are coping with various forms of stress including divorce, extreme conflict between parents, sexual abuse, physical abuse, neglect, exposure to violence of various sorts, death of a parent, chronic illness of a parent, and loss of a loved one.

Play is the natural language of children. While adults are mostly able to use words and concepts to discuss their concerns, children have much less of an ability to verbalize what is bothering them. Instead, they play out their concerns. In play therapy, a child is given access to a variety of selected toys, games, and art materials that lend themselves to being used in any number of ways that can help express feelings, thoughts, and situations. The child makes use of these and the trained child therapist uses the play as a way of communicating understanding of emotion and acceptance of the child’s experience, offering alternate forms of response to troubling situations.

For example, consider the situation of an imaginary four year old child who was hurt in a frightening auto accident. He had been doing well prior to the accident but was traumatized by it and began behaving very aggressively toward his peers and uncooperatively at home. He was also bothered by terrifying dreams of giant insects coming after him. Each week in his therapy session he would enact scenes where he would crash toy cars together, the people would be scared and hurt, ambulances would arrive and take the injured to the hospital, and doctors would care for the wounded. He would draw pictures of his frightening dreams. Eventually, after several months of this work, the boy stopped the repetitive play in the office, was no longer acting aggressively at school and was more cooperative at home. Not that every case goes so well (I wish it did!) but much more often than not a child’s worries and fears can be relieved through play therapy. In effect, play – the most natural thing in the world for a child – can be harnessed for its curative potential, freeing the child to resume the more normal course of development that was interrupted.

Child therapy is a confidential relationship, just like therapy with adults. However, since children’s development is so much related to understanding and responding effectively to their behavior at home and school, when I work with children I will meet with their parents regularly and discuss their child’s progess with them. I often have phone contact with the child’s teacher, as well, so I can hear how the child is functioning at school. I should also mention that while I generally see children by themselves I sometimes make a clinical decision that it would be most helpful to see a child at least part of the time with his or her parent or parents. Again, this is decided on an individualized basis and in consultation with all parties.